I’ve owned homes before, but never by myself. A couple of weeks ago, I took a new leap into home ownership. Man, what an adventure! I’m not being sarcastic…not entirely, at any rate. But, hoo boy, there are some things you just don’t anticipate until they happen. I thought that living on the second floor of an apartment building, I was climbing a normal amount of stairs, but I was grossly mistaken. Now that I have a two-story building, I’m up and down between the basement and the second floor all day long. The first few days were so crazy, my FitBit was sending me all kinds of congratulatory emails about my step count. (It’s calmed down now, but I’m getting the 10000 step days again that I used to when I was teaching water aerobics.) 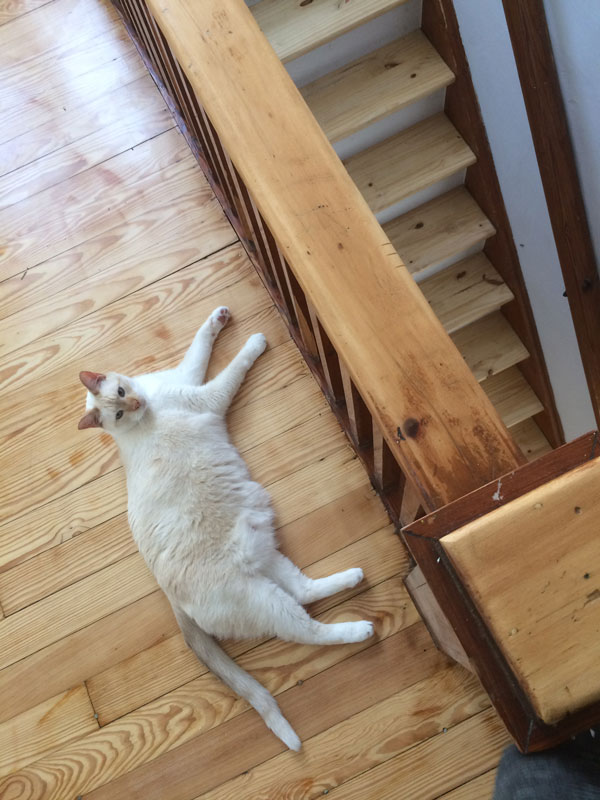 Back when my cat Frankie first adopted me, we lived in a trailer, which is all one level. Then we moved to the apartment together, and the only time he went downstairs was in his carrier. So it’s quite possible he was encountering stairs for the first time! The way he went up or down one at a time, it seems possible they were new to him. Now he’s not exactly racing up and down, but he’s definitely getting the hang of it.

I even started wondering if maybe I could increase his food (which I measure out on vet’s instructions), because he is starving at mealtimes now, and not just I-can-see-the-bowl-bottom cat-starving. But as you can see, he’s still got some chub reserves.

Before I moved, I had visions of myself tucked away in one of the many wonderful nooks in my new home, pouring out brilliant and prolific prose thanks to my gloriously private surroundings. Fast forward to the reality of the room I’d set aside for the den turning out to be distracting, and all my crap in boxes where I can’t find it.

I think the disorientation goes deeper, though, than not knowing where my spare backup drive is. (And I’ve been looking for that sucker for two days now.) There’s the “where am I?” strangeness that’s psychologically distressing for a homebody like me in the situation of being somewhere new, even if that somewhere is pretty great, and it’s mine.

This morning I was delighted to finally, FINALLY produce some wordcount. While I gear up to write PsyCop 9, I’m warming up for it by doing a Vic novella for PsyCop Briefs Volume 2, which I think will be ready toward the end of 2018.

One especially delightful thing about having an obscene amount of space is that I can get back to things like drawing, painting and sewing. My friend was just remarking on the sewing machine on my dining room table–I’m hemming some sheers–and I almost said, “Well, I don’t really sew.” But I caught myself. Because maybe now, I do!